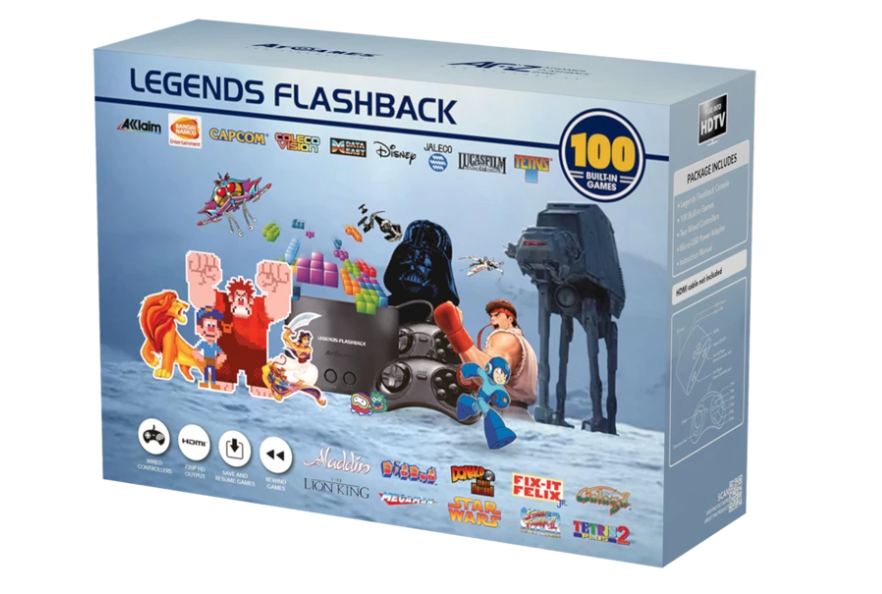 To be a retro gaming fan right now means tons of choices competing for your gaming dollar. One such company, AtGames, is launching a new unit that features 100 licensed games. The Legends Flashback, 2019 version as it is referred to by Armchair Arcade, will feature an interesting mix of arcade classics and home titles inside the box. What this means for fans is, there will surely be something worth your dollars here.

Do you prefer overhead scrolling shooters? Check out 1942 or Darwin 4078. Want your scrolling shooters with a bit more than gun and dodge? Forgotten Worlds or Commando are for you. Maybe you want to check out some of those former import only titles that Piko Interactive have acquired and released but just can’t quite afford physical editions. The Legends Flashback features Water Margin – The Tale of Clouds and Wind, Thunderbolt II, and Tinhead to name a couple.

They even got Lion King and Aladdin on here, two titles in the news recently for the re-releases hitting modern platforms. Please note the versions included on the Legends Flashback are the originals, not the re-releases.

If you look closely at the Legends Flashback box you will see a squarish shaped box with two round buttons. That is the console itself. Next to it though you will see two controllers that have a familiar design to them. These are pretty much six button Sega Genesis controllers. For fighting game fans this design was great, especially in comparison to what Nintendo had on the market with their Super Nintendo). This design lends itself well to other genres as well. It helps that this controller design is also pretty good for long gaming sessions (though regular breaks still rule).

An all in one gift for that retro gaming fan in your life is basically what the Legends Flashback is. Head over to Armchair Arcade for the full list of games that are included. Retro gaming fans will recognize more than a few familiar titles.