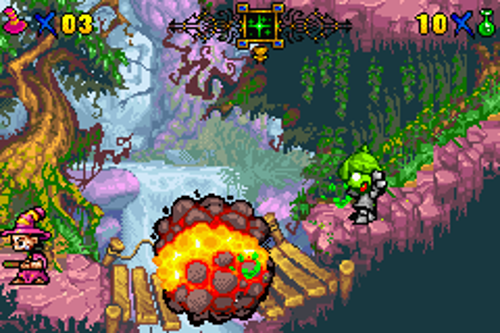 Piko Interactive have acquired the rights to another formerly thought lost title. This time it is for the Game Boy Advance, an action title named Odema and the Book of Magic. Fans of 2D side scrolling action games will want to check this one out.

A glimpse behind the scenes

If you are unfamiliar with how Piko Interactive acquire the rights to titles, then you are in luck. Eli Galindo, owner of Piko, has turned on the video camera and sat down to lay down some of the details of this process.

It is not as simple as you may think. There is a lot of steps that must be completed in order to make these unreleased games a reality. Odema and the Book of Magic.

What we know about Odema

According to Unseen64.com Odema and the Book of Magic was intended to be a “kiddy Metal Slug” title. Odema was allegedly planned to feature 7 worlds with multiple paths and 30 different enemies (including 14 bosses). Namdoo is credited as the developers of Odema.

As can be seen in the video by Eli above, while quite early, Odema was impressive in the current form. In the video you can check out a bit more information on exactly how far along in development the game reached before cancellation.

What does the future hold for Odema

Well, Piko Interactive have a record of completing many of these titles they acquire the rights to and releasing them on various platforms. Usually the original platform the game was intended for is a given platform for release and then Steam as well. This means as many fans as possible can enjoy the game at an affordable price.

Considering the content being created to celebrate the acquiring the rights for Odema we can expect a finished release at some point in the future. Oh the wait is going to be tough for fans, myself included.

Check out the Odema video and if you like it, give the channel a subscribe and the video a thumbs up. More information and releases like this are to come if fans support it.