It is an exciting time to be a retro gamer. From new games such as Inferno for the MSX2 to new portable devices featuring classic games, retro gaming is alive and soon kicking at a retail location near you. If not, there is always that handy on-line option. We have more news concerning another portable device, setup like the My Arcade Pixel Classic. The distinction here is the game lineup. Both portables contain about 300 or so games with the Go Retro portable having a deeper licensed lineup.

The My Arcade Pixel Classic game lineup is headlined by eight Data East classics. The Go Retro Portable game lineup is headlined by not only those same Data East classics but also titles from Capcom along with Jaleco, Piko Interactive, and Irem. The actual titles to be featured are not available yet but judging by the box art we are going to see 1943, Mega Man, Mega Man 2, Burgertime, Bad Dudes, and Mighty Final Fight at the bare minimum included.

This brings up the fact that these will be the 8-Bit Nintendo Entertainment System versions of these games. If you are looking to play the arcade Strider game on the go, you may have to look elsewhere – certainly one of the reasons my interest was piqued over the Go Retro Portable box. 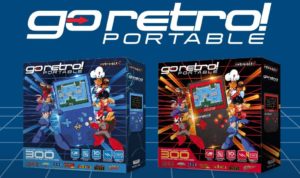 Nonetheless, for a suggested retail price of $34.95 you will get those games, and many more, in a sleek package that resembles the original Game Boy from Nintendo. That includes a scratch resistant, color, LCD screen, internal rechargeable battery with 7 to 10 hours of play, and a 3.5 MM headphone jack.

The Go Retro Portable is expected to be available in September 2018. Not much longer. Seriously, that is less than a year away. We can wait.

Support companies supporting what you love, and we will get cooler, and better, stuff.