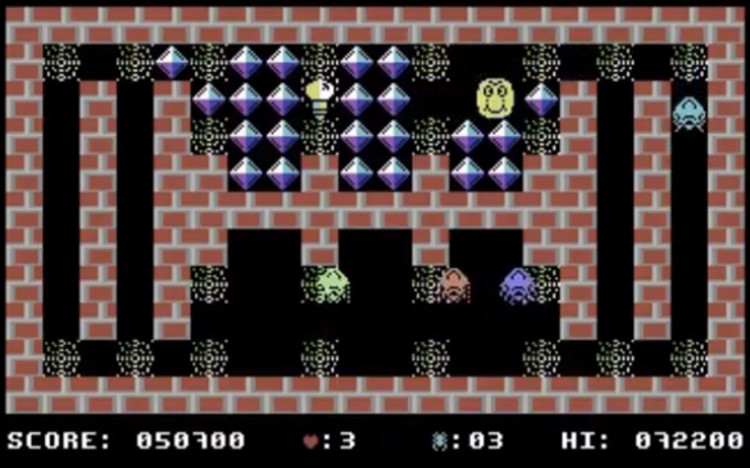 Arcade style games are commonplace, especially on the Commodore 64, but how many can you name that feature a maze concept? Spider Maze is one such arcade style game for the C64 that was just released. This is a brand new game developed in assembly which lets the programmer work closer to the metal in the machine. That is all fine but actual gameplay is what counts.

Setup similar to Pac-Man, Spider Maze requires you to move around a single screen maze and collect all of the gems. As with that classic Namco arcade title, there is more to the challenge than just running around a maze.

In Spider Maze the enemies start out easy but later on they are tougher and change – unlike Namco’s classic.

The goal of Spider Maze is to move around the maze and collect all of the gems while avoiding the enemies that patrol the hallways and open areas. Some of these enemies are spiders and in later levels you will encounter skulls.

You are not completely defenseless in Spider Maze though. You can collect the light bulbs and receive invincibility for a short period of time. Use these sparingly, like you would the power pellets in Pac-Man.

Between each level you receive a few words of encouragement, and a warning, before advancing to the next level. A neat little touch that would have had more impact if the text was used to give you some tips on how to conquer the next level or something. As it is, the same text each time, it is cool at first then becomes just more text as you progress.

The audio in Spider Maze is quite good for the Commdore 64. It is not something you will want to buy a music CD of but it is better than beeps and boops that we often get with independent homebrew releases.

For a free title you can hardly go wrong but thankfully Spider Maze is worth more of your time than other releases we have seen recently. Check it out at CSDB.dka and let them know RETRO Magazine sent you.