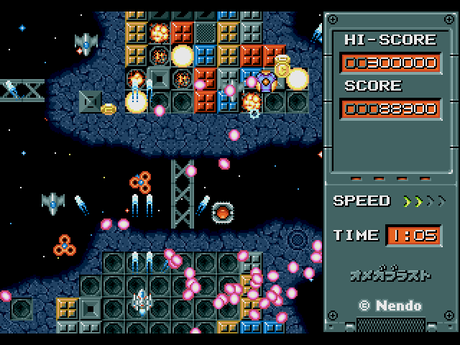 It is always interesting to see more modern genres ported to classic gaming platforms. When using a modern game as inspiration these are referred to as “demakes” such as the Atari 2600 version of Halo. Other times they are just a new game, in modern style, for a classic platform. Omega Blast rests peacefully in that second category – bringing bullet hell shooting to the Sega Genesis.

The year is 2300 A.D., in the desert region of the Nemlia continent ancient ruins have spontaneously appeared. These ruins are identified as belonging to the Nemresu. Dr. Gyro investigated the Nemresu ruins and discovered in their deepest section an ancient “super fighter” called the Omega Star. This ship, even though old beyond words, still surpassed the power of anything humanity currently had.

A decade passed since the discovery of the Omega Star and humanity has expanded its reach outward into the stars. The space defense army suffers a sudden and nearly complete ambush by a new powerful enemy that is headed to our solar system. With no other choice, humanity unleashes the Omega Star as the last gasp of homo sapiens.

What follows is a 2D overhead scrolling bullet hell shooter. You are given two minutes to accumulate as many points as you possibly can by blowing the enemy out of space. There are obstacles that need to be either destroyed or avoided as well. You can choose between “Normal” and “Hard” game modes and listen to some tunes in the Options menu.

Get ready have your butt handed to you in this one. It is not an easy game by any means. Graphically, Omega Blast is about on par with late first generation Sega Genesis shooters like the overhead portions of Thunder Force II or Task Force Harrier EX.

Grab your copy from Nendo.16