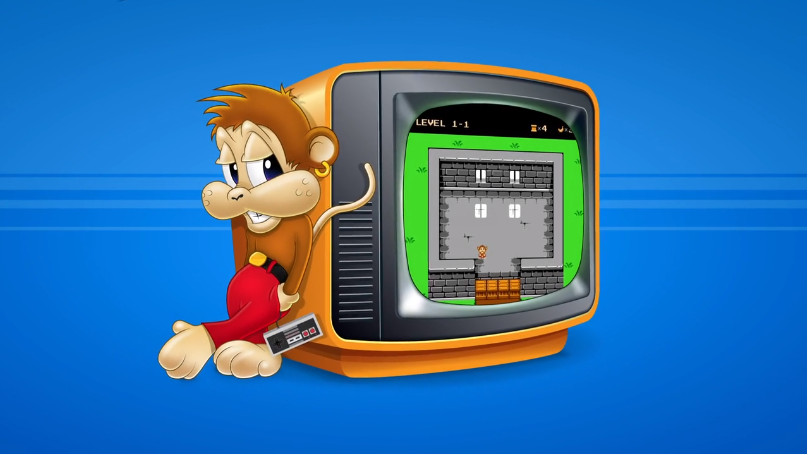 Continuing our romp around the 8-bit world of new games is Soko Banana for the Nintendo Entertainment System (NES). This is a Kickstarter project that has a very modest goal for funding (already met) and features an interesting take on a classic game genre (Sokoban). Soko Banana is a puzzle game for those that don’t know what Sokoban is.

Sokoban is a puzzle game that has gone by many names in North America. Boxy Boy on the Turbo Grafx-16 and Shove It! on the Sega Genesis were two early 16-bit games based on this classic title. Over the years there have been many other variations. Soko Banana is the first, that I am aware of, to feature a monkey though.

According to Popgeeks.com, the demo for Soko Banana was available at Byte-Off (it is also available on the Kickstarter page). Popgeeks offered up a bit of kudos for the graphics, animation, and music as well.

A monkey, crates of bananas, and warehouses

Your goal in Soko Banana is to get the crates of bananas to the warehouse exit. That sounds simple enough. If you have ever played a Sokoban game, then you know just how complicated things can get.

Sokoban is all about the fact that you can only push objects. You cannot pull. This means you must absolutely be careful when moving the crates around the warehouses to not get stuck against a wall or in a corner. If you do, you are stuck and will have to restart the level.

The devil is in the details

Soko Banana will feature four different islands for you to work through. Each island will feature ten regular and two bonus levels for a total of over 48 levels. There is also a bonus island that will be available to the best players to challenge.

The goal of the Kickstarter is to fund physical cartridges complete with professionally created boxes and manuals. There are perks for backers that include shirts, digital soundtrack, etc. There are physical and digital options available which is great to see. So many potential fans simply don’t have the means to play a physical copy today, good on the developers for offering digital options.

There is a demo available if you want to give Soko Banana a go before throwing down your cold hard cash. Grab the demo and possibly back the Soko Banana Kickstarter on their project page.