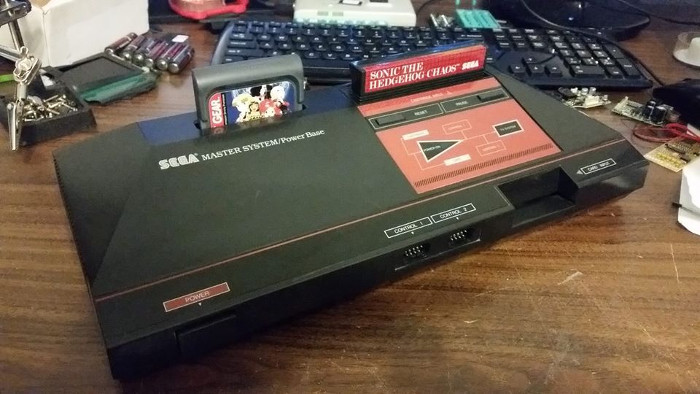 It is not all that often that we see hardware modifications so when we heard about this one, it was moved right up the editorial list. Folks, this is more than likely a one of a kind combination console. Featuring both the Sega Game Gear and Sega Master System in one is just the start. Back in the day, gaming publications had a tough time getting quality screen shots of portable games due to the lower quality screens. In Japan there was a modification made available that would let editors play Sega Game Gear games through their monitors and of course their capture software. Too bad they didn’t have the gentleman behind this hack on staff.

This modification is not just a quick hack job. There is some serious functionality going on under the hood. The Sega Game Gear had its guts taken out of the case, the PCB reworked a bit (unnecessary things removed) and recapped to fit inside the Sega Master System case. Not only that, the cartridge connector was relocated to fit better in the confined space of the home console.

Within the Sega Master System things were rearranged a bit to accommodate the new hardware residing within.

This modification would be cool if he stopped there. Thankfully, he didn’t.

The Sega Master System being open already just begged for some updates and modifications. These being adding S-Video and RGB connectors, upgrading the audio from the Sega Master System to stereo, and installing a Game Gear TV out board. The controller ports were connected so you can play GG or SMS games with one controller, but not at the same time obviously. 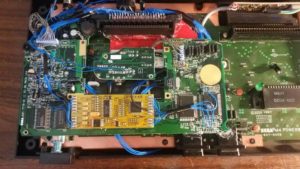 The console was not the only thing to get upgraded as the Sega Master System controller sees a start button added for good measure. This is simply an amazing hardware modification.

What is even wilder, there are plans for a short run of Game Gear consoles when the hacker gets a 3D printer. This could turn into something even bigger when that happens. 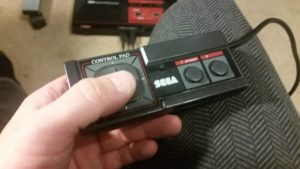