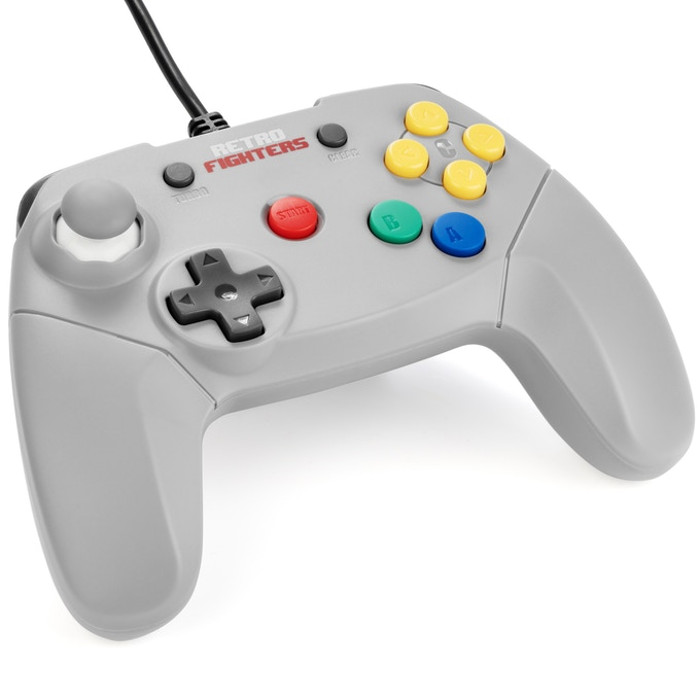 This time of year is often rough for crowdfunding projects. Maybe it is the whole paying taxes situation, but money is simply not flowing like other seasons. Retro Fighters is one of the more recent successful funding projects we see on Kickstarter though. What is interesting is, just what fans helped fund here. A new controller for the Nintendo 64 console. A more modern style controller to be exact.

The Retro Fighters controllers are going to be available in various transparent colors.

Purple, green, blue, red, and orange are all colors that fans picked for the Retro Fighters transparent controller. There are pics of each on the Kicsktarter page for those interested in seeing them.

The biggest design change here is the removal of the center stick on the original Nintendo 64 controller. To accommodate the “Z button” situation, this new controller has dual “Z buttons” available (one on each side acting like “L” and “R” buttons on PlayStation or Xbox controllers.

The “C button” arrangement has been changed as well. Those four yellow buttons are now slightly bigger, making it easier to transition to them while playing games that use them for more than just camera controls.

There is also an added turbo function.

The Retro Fighters controller is fully compatible with the Rumble and Memory Paks. No word on if the Nintendo Game Boy transfer pak works though.

You may be wondering just who the market for the Retro Fighters controller is? Well, just about anyone playing more than just Super Mario 64 on the Nintendo 64.

While the controller layout of the original Nintendo 64 controller was great for games like Super Mario 64 and the two Legend of Zelda games, it was atrocious for just about everything else.

This new controller will be ideal for anyone wanting to play Mortal Kombat or Smash Bros on the Nintendo 64. The true test will be playing Super Mario 64 with this thing.