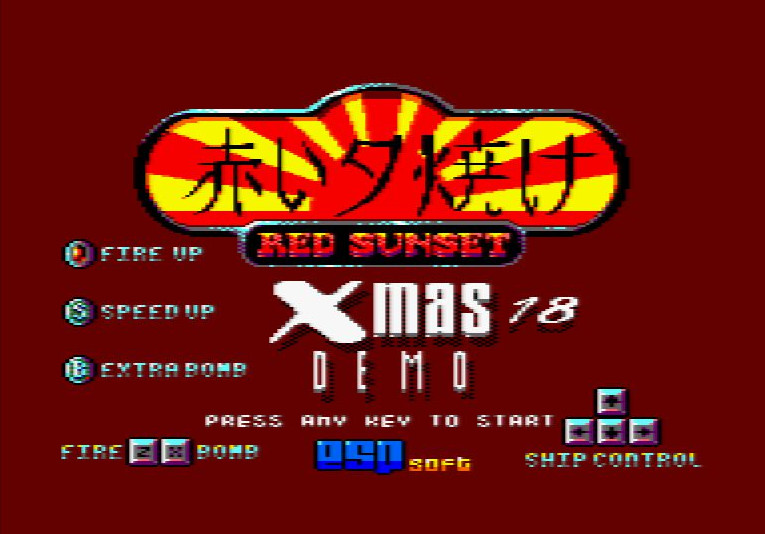 Scrolling shooter games once were almost the defacto genre for gaming consoles, they were never quite able to overtake mascot based action games during the 16-bit era. Thankfully for fans of the genre other fans that have the skills to create new games also love this genre. Red Sunset is another entry in the vertical scrolling shooter genre and is coming to the Amstrad CPC later in 2019.

While I love the genre, I am not that good at scrolling shooters. That does not stop me from enjoying new entries though.

Red Sunset is one of the latest entries in the genre from ESP Soft. CPC Game Reviews makes the comparison to 1942 and Flying Shark in their mention of Red Sunset. I can see that, especially when you consider the background “idea” of the 194x series of vertical scrolling shooters.

While the actual background story for Red Sunset is not clear, who the enemies are in the game is. It would be awesome to find out some of the background on this one, though it doesn’t matter all that much in the heat of battle.

Graphically, Red Sunset is impressive for the platform. Enemies are on the smaller side, even bosses, which gives the game a bit of a larger than it really is feel – there is plenty of room to move around the screen and avoid enemies and incoming fire for instance.

While not as graphically impressive as something like Space Megaforce on the Super Nintendo or even Raiden (multiple platforms), Red Sunset still holds its own with that underlying charm of 8-bit. Weapons powerups are not all that powerful looking from what I was able to play but they get the point across when you realize enemies are taking less hits to kill.

The projected release date for Red Sunset is sometime in 2019 so we may, or may not, have a long wait ahead of us.

Grab your copy of the demo here.