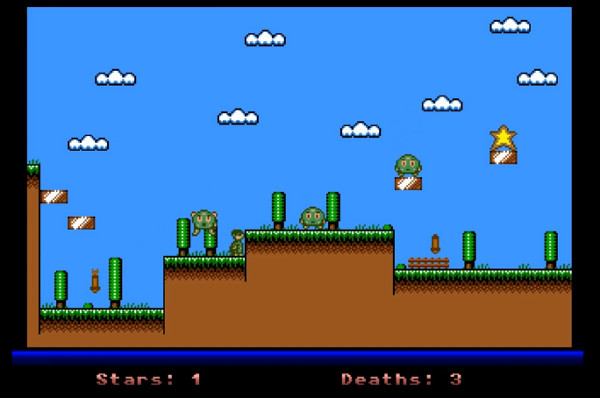 Yes, you read that right, an independent hombrew developer is working on a game and they named it “The Game”. Rather odd choice for a game title, that is going to make life rather tough in promoting it via search engines and such. Anyhow, The Game is fully playable, though not quite complete. Fans of Nintendo’s Super Mario Bros will notice a few similarities along their quest to beat The Game (does any else think this sounds like a generic video game used in a movie or television show?).

It is made clear in the read me file that the author is only using “The Game” as a name placeholder. Maybe once you try it out you could send them name suggestions – who knows, they might use your idea and give you a perk in exchange (mention in the game, maybe let you pick a new enemy, etc).

What you will get when downloading The Game is a 2D side scrolling action platform game.

One of the enemies shares a striking resemblance to Buzzy Beetle from the Super Mario Bros franchise. They say imitation is the best form of flattery so Buzzy Beetle should be blushing a little at this one.

The Game is a single screen action platform game tasking you with the goal of collecting the stars that are strewn around the game world. These stars don’t give you any power like they do in the Super Mario Bros franchise, you just collecting them like Mario collects coins here, just less frequent.

You can grab The Game in a couple of different formats, one being the disk version for Commodore Amiga and another being an ISO for the Amiga CD32 console. Always great to see more support for the CD32 console.