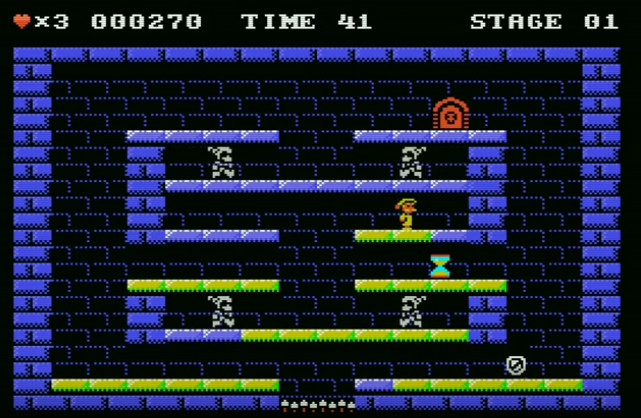 Q*Bert is not exactly a title that is paid homage to all that often in the gaming community. Of the classic titles from the early to mid 1980’s, Q*Bert is one of the few that has not been copied to death already. Night Knight by Juan J. Martinez, aka Reidrac, while not a copy of Q*bert, borrows a bit from that classic and puts it to good use in new ways.

In Q*Bert you were goal was to jump on all the platforms and turn them a certain color – some may require more than one pass by you. To make things interesting, there were various enemies to avoid. Once you turned all the platform tiles to the necessary color you moved onto the next level and repeated the process till you died.

Night Knight takes the premise of turning the tiles a different color and mixes it with single screen, 2D, action platform elements. This change of point of view has also brought with it a new way of enjoying a classic gameplay idea. While you won’t be avoiding snakes in Night Knight, you will be avoiding skeletons, ghosts, and other medieval style baddies.

In development for the MSX computer, Night Knight certainly has a nice charm to it. Currently there is not a lot known but graphically, Night Knight is impressive.

According to Indie Retro News, Martinez is a prolific programmer who has developed many titles including The Legend of Traxtor, Golden Tail, The Dan of Kernel, and Space Pest Patrol to name a few.

I will be keeping an eye on Night Knight as it is an interesting take on a classic idea. What do you think of Night Knight though? Tell me in the comments. We really do pay attention to what our friends want to see more of and try to deliver so let your voice be heard.