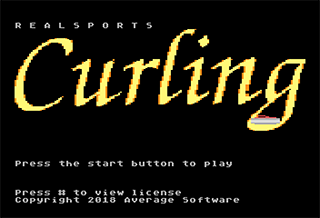 Curling, the Olympic sport that most viewers ignore, contains a lot of strategy and nerve wracking challenge than many would like to admit. This sport can easily be just as friend breaking as a game of Super Smash Bros with the right combination of players. Thanks to AtariAge, you can now play this Olympic sport on your Atari 5200 console.

Everything from the sport is here in the Atari 5200 game – sweeping, aiming, weight of shot, etc. I know, it sounds awesome, right? Well, much like any sport, if you have the right combination of friends available, up to eight can play RealSports Curling, then you certainly have a competitive environment.

The fact that so much from the sport is in this game is great. While I cannot stand the sport, I can easily see how the game would be fun and if you play against others then could possibly end friendships. Think about it, when you are barely making your shot and it knocks your opponent out of the scoring area for the win, that is certainly going to garner calls for “one more game”. Probably into the wee hours of the morning if you are not careful.

Graphically there is not a lot going on with RealSports Curling but that is not where the action is, I know – stop laughing, you know what I mean. The physics engine has to be on spot for this type of game to work correctly. Judging by the video available, the developer, Ryan Witmer, has the physics engine dialed in just right.

AtariAge has RealSports Curling available complete with brand new box, manual, and cartridge. Everything is done with great attention to detail and with high production values, as usual with AtariAge releases.

Head over to AtariAge and grab your copy of RealSports Curling today.