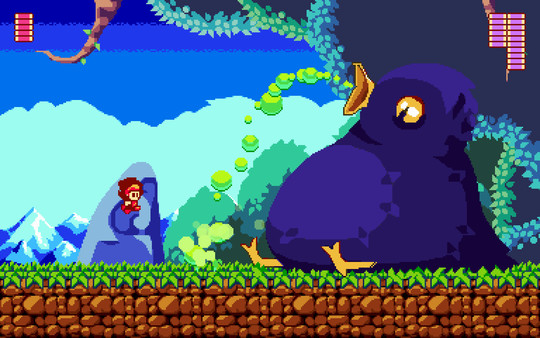 The once mighty 2D side scrolling action adventure genre is still alive and well in the PC world thanks to indie developers. Armortale is one such new release that will remind fans of the why the genre rocks.

One iconic night when the stars were clear and bright, a mysterious tower appears. Unleashed from this tower is a horde of monsters that quickly ravage the land leaving devastation in their wake.

A hero appears, one sporting four legendary sets of armor, and quickly takes on the baddies and seals them up in the tower once and for all. That hero was your relative.

Many decades have passed, and the baddies have found a way out of the tower once again and are ravaging your homeland. It is up to you to take up the armor once again and end this tyranny once and for all.

Hearkening back to the good old days

Visually Armortale is very close to what you might have expected from the Super Nintendo or Sega Genesis if the right devs were behind it. The art style is hard to place as it seems like two types of art are battling it out on the screen. The main character and most of the enemies are decidedly 8-bit. That is juxtaposed against levels, backgrounds, and main bosses that are 16-bit in nature.

Go ahead, check out the gameplay video above.

I am not knocking the art direction in Armortale, just pointing out what I see here. Oddly it works here, the two generations of graphics.

RPG2 Heaven, the devs behind Armortale, have put in their homework. This is evident in the fact that they have included controller and keyboard layouts. Yep, no having to load up a keyboard to controller mapping software like many PC releases.

Head over to Steam to grab your copy of Armortale, it won’t break the bank.