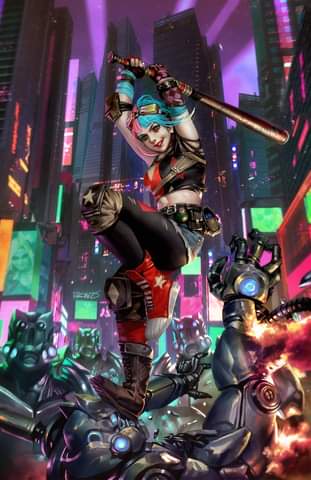 The lady whose primary love interest is the Joker had her last series concluded with #75 just a few months ago. Now comes two new series.

The first one will be a mini-series consisting of two parts, called Future State: Harley Quinn. It will arrive January 5th and February 2nd, respectively. Writer Stephanie Phillips will team up with artist Simone Di Meo for this one, with Derrick Chew providing the cover.

Then, in March, Phillips will return with a new series drawn by another artist, Riley Rossmo. Phillips commented on the upcoming comics in an interview with GamesRadar/Newsarama:

While Future State is taking place some years after this [‘The Joker War’. ed’s note], I think it’s important to see Harley really forging a unique path that we haven’t seen for her yet, and I think we will continue to see more of that in 2021.