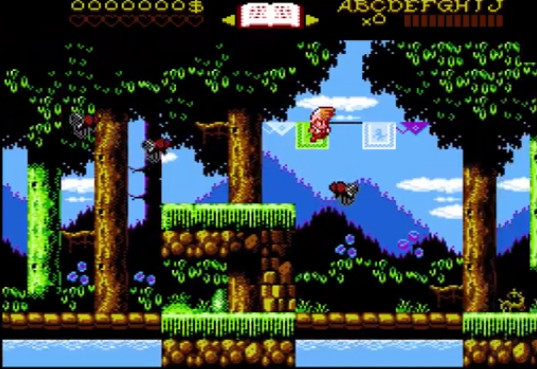 Who wants a new 8-bit Nintendo game? Anyone? Well, Malasombra by the 4MHz team is going to answer your wishes. This is a brand new 2D side scrolling action adventure game full of charm.

The story of Malasombra is not a somber one

The story of Malasombra is one of fantasy featuring witches, bounty hunters, magic, an evil sorcerer, and princesses. Taking control of Pirou, a soft-spoken magician, you must save the love of your life from the evil sorcerer, Malasombra. It is never good when the game is named after the bad guy, I know that much.

Your quest to save the princess is going to require collecting pages of a powerful grimoire. Doing so gives Pirou more powers that will aid him in his quest (cool how that works out, huh?).

The trailer and what we can tell from it

Currently enemies seem to flicker when shot, not die but just flicker off the screen only to return. I am hoping this is going to be remedied in the future with a damage animation.

Pirou has a cute bobbing head animation when standing still and when he unleashes magic with his wand, he bounces back. Some may not be a fan of this result as it can cause problems. Kind of like how Daffy Duck bounced back when shooting his gun in Marvin Missions for the Super Nintendo. This could be a charming effect or one that turns off fans.

There is no animation in the backgrounds which would be great if that is fixed before release. The music is nice and upbeat and is quite good for the NES.

How Malasombra came to be

According to the press release 4MHz released, development officially began in March 2018. This was when several concept tests and such made the rounds for the Amstrad CPC. The Nintendo Entertainment System port did not enter development until October 2018 with graphic and programming tests. Malasobra is now an 8-bit Nintendo NES exclusive title.

According to Indie Retro News, the 4MHz team have a good list of releases under their belt for the Amstrad CPC. These include Operation Alexandra and The Lost Treasure of Cuauhtemoc.

Lastly, you won’t have to pay out a hefty amount for the cartridge version if you don’t want to for whatever reason. The 4MHz team are going to be releasing a digital version of Malasombra as well as a cartridge edition. Check their website out for more information on the team behind Malasombra.