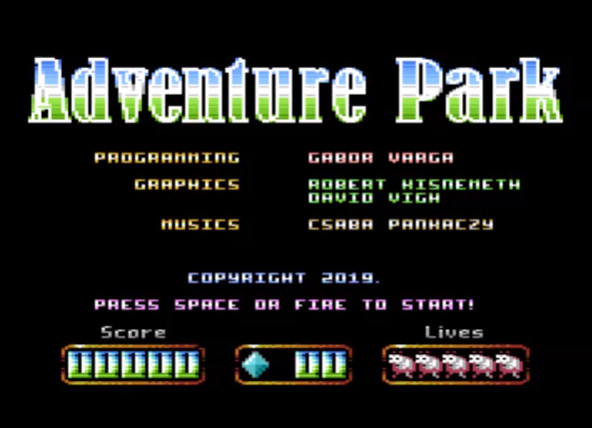 Independent homebrew developers are keeping the new games coming. Adventure Park is one of the latest to launch. This time it the Commodore Plus/4 computer that I am talking about. Who owned one of these back in the day? I did in the late 80’s during a period when most families were unloading stuff their kids left when moving out. This was long before the Internet so getting new games for this computer was tough in a small town in Northern California. A game like Adventure Park would have certainly been received well back then.

Adventure Park doesn’t sound like a side view action platform game. That is what it is though. The action takes place on single screens, there is no scrolling, and you must collect diamonds on each screen before advancing. There are some rooms that will feature more than one exit as well causing you to have to decide which way to advance.

There is no interaction with enemies so get images of pulling some Mario combos like you did in Super Mario Bros on the Nintendo Entertainment System. That isn’t happening here. Your only defense is to avoid the enemies and collect your diamonds before moving on.

Our friends over at Indie Retro News state that Adventure Park features 34 screens and 99 diamonds that need collecting. That is going to take a bit of time so set aside a good chunk of time to play. We all hate getting a game dialed in and then having to cut short our fun.

Adventure Park features something, that something that is hard to pinpoint. It has a charm about it that makes it more interesting than just “another indie game”.

It is not often that I get to discuss games like this. Most are missing something. If I had to pinpoint something missing in Adventure Park I would have to go with the music. I would love to hear more varied tracks but considering the limitations of the computer, a computer released in 1984, it is understandable. I must stress, that is stretching to find something to improve upon. Again, not something I am used to having to do with indie releases – most are missing obvious pieces.