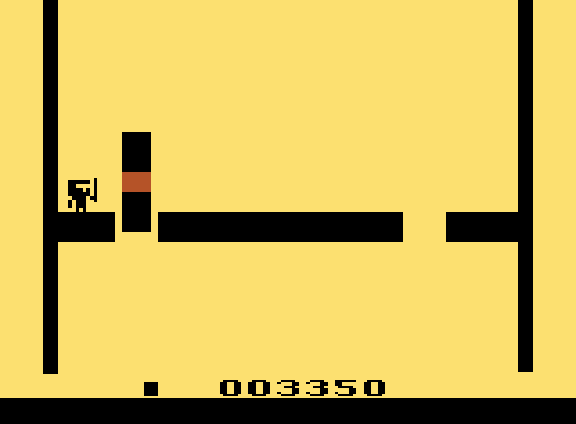 New Atari 2600 titles are fun to check out because programmers today are not making these games with the same mindset of programmers back in the day. Programmers today have a wealth of knowledge and gaming history fueling their efforts. This gives more recent Atari 2600 releases a unique take on the limitations of the hardware. Knight Guy in Low Res World is one such title that takes advantage of gaming tropes that have been developed over the years.

Knight Guy in Low Res World is the brainchild of AtariAge forum member “vhzc” who started programming with batari Basic around July/August of this year. He has stated that Knight Guy is his second game using the popular BASIC interpreter for the Atari 2600.

Take a look at the YouTube video below and see Knight Guy in action. As you can see, it is a 2D side view action game. Considering the limitations of the Atari 2600 there is no scrolling so all the action is contained on single screens.

Fans of minimalist games like Limbo will be right at home with Knight Guy in Low Res World as you cannot get more minimal than the Atari 2600. What is great though is the level of detail that vhzc has been able to instill into each screen.

Knight Guy is obviously wearing a helmet and has two arms and legs with enemies having clear features that let you know what you are facing. From intelligent fire to snakes and spiders, the enemies are clear and easily identified in game because of their color and design.

Run and jump action fans can do a lot worse than Knight Guy in Low Res World for the Atari 2600.

Head over to AtariAge and grab the free files that are available. While there, why not sign up for a free account and show developers some support with a comment or two.