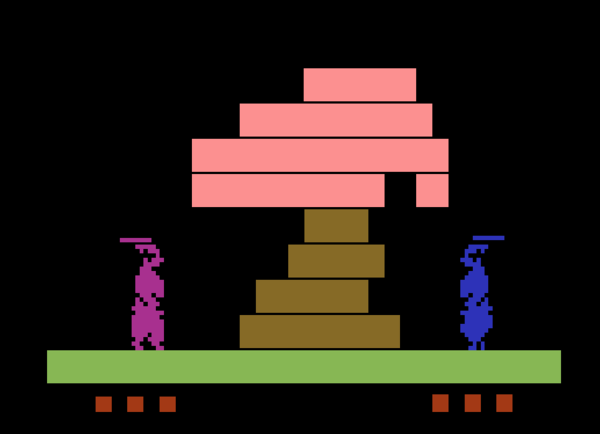 The way of the warriors, that is what Bushido translates into. Saved you a search on Wikipedia and personally learned something in the process. Bushido is not just a collective term for fighting with honor but also the name of a new Atari 2600 title currently in development.

Not so popular fighting genre demade on Atari 2600

Quick, off the top of your head, name five fighting games that are based on a code of honor like that of the samurai.

I know, it is tough. There simply are not that many games in this genre available. We can narrow it down even more by limiting your search to retro consoles around the PSOne and Nintendo 64 era or older.

For me, I can only think of Budokan for the Sega Genesis and that one samurai entry by Square Enix on the original PlayStation – even the name escapes me (leave me a comment if you know the title).

That is why I was rather excited when I first saw Bushido in the Retro Indie Game Developers Facebook group. It is just such a unique entry for such a limited console. After all, the Atari 2600 only has one action button and a joystick for input. That’s it.

How can the Atari 2600 host a good fighting game, let alone one based on a code of honor?

There are limitations of course

First, there are only three levels to fight in.

Cherry tree in the background
Winter stage
Bridge of Destiny

Next, the fire button swings your katana and the joystick moves your samurai. Interestingly, fatigue has been programmed into Bushido as it takes time to regain enough energy to swing again.

Pressing up makes him jump, add a direction to jump that way, and press the fire button in the air to swing your sword.

Next, each player can take three hits before the match is over. The third hit will result in a decapitation.

Finally, Bushido is two player only.

Sound cool? Head over to the AtariAge forums and grab your download of Bushido for the Atari 2600. It is free!