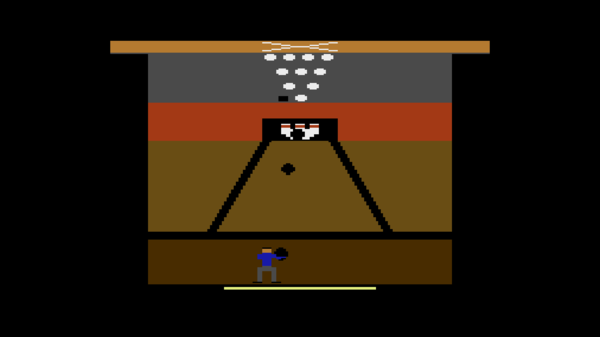 Sports games on the Atari 2600 were not all that popular. Sure, developers tried but the limitations of the hardware reared their ugly heads quite often. One sport that was overlooked early on in gaming in general, let alone on the Atari VCS, was bowling. There is only one bowling game officially released and that was in 1979, developed by Larry Kaplan. Well, soon we will be able to add Pro Bowling by AtariAge forum member, “easmith”, to that short list of bowling games on the early Atari console.

Changing the game for the better

Larry Kaplan’s take on the elbow throwing out sport was a side view affair. Graphically, much like most VCS games, you had to use your imagination. A lot. I am not knocking this early effort, just warning those that are new to Atari games, it is not what you are thinking, I am sure.

Easmith’s take is more modern in that it is behind and above the player character with a pseudo 3D viewpoint. Your character hangs out at the bottom of the screen with the pins resting at the end of the lane about three quarters up the screen. Above the pins is a representation of which pins remain to be knocked down.

Over on the AtariAge forums easmith mentions focusing on that pin representation when bowling. The pins at the end of the lane are just a graphical representation. The pins above are literally where they are in the game world. Keep that in mind when trying the work in progress demo out.

Part of the imagination gamers had to put into Bowling several decades ago was the gender of their character. That is one thing that is being tackled with Pro Bowling. The latest update offers male and female player characters selectable via the color/B&W toggle on the console. Nice touch.

Follow development on the AtariAge forums. Special thanks to the Retro Indie Game Developers Facebook group for the heads up.