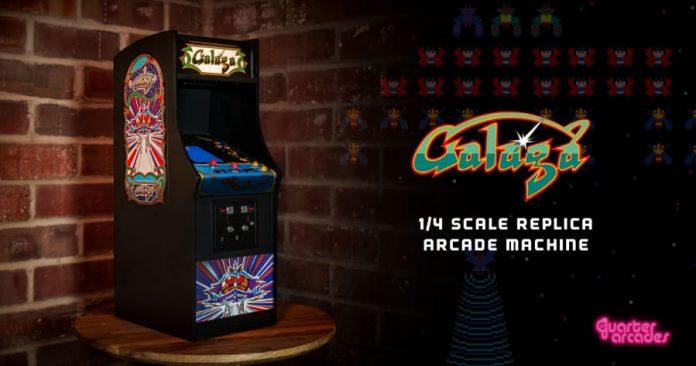 Back in the day owning your own arcade machine was a dream. A dream only fulfilled by people like Ricky Schroder on the sitcom Silver Spoons. Us regular people simply were not in the position to own these machines. That is why we depended on home ports, that were often inferior in more than one way, to get our arcade fun. Today, there are options for fans to own arcade units at home thanks to companies like Numskull Designs.

Not full size, not a home console port

Numskull Designs creates 1/4 scale replicas of classic arcade machines for home use. Galaga is the next in the line of Quarter Arcades that fans will be able to secure via pre-order. Release is expected in September 2019 so, as of this writing, not much longer.

Familiar arcade shooter in all its glory

Galaga launched into arcades in Japan and North America later in 1981. It is known as a fixed shooter versus a scrolling shooter like Gradius or Raiden. For the one or two reading this that do not know, Galaga is the direct sequel to Galaxian, another Namco arcade shooter from 1979.

Quarter Arcades all the fun

These Quarter Arcades may be one quarter the size of the original machines, but they pack the original game inside. This is accomplished thanks to advancements in technology and programming. What used to require many expensive circuit boards and easy to break connectors is handled by an affordable computer. These computers run an emulator that makes the game think it is running on official hardware. This is not a system on a chip. This is the original game code running.

Head over to the Numbskull Designs website to pre-order your Quarter Arcade.