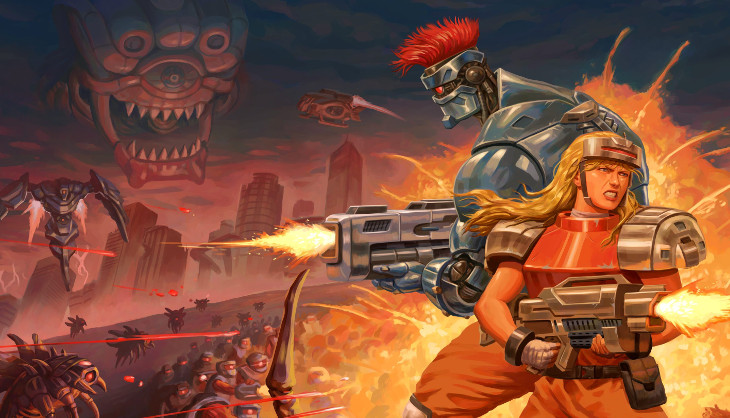 There is a story here

The world is ruled by robots and machines and humans are relegated to the bottom of the food chain. Humans are nearly extinct and done for as a species. That won’t stand as humans are not the type to roll over and take a bad situation.

Like the story of Terminator, packs of humans survive in the harsh mechanical world. These packs of humans rebel whenever possible and there is a good chance they will survive.

Whose who in the post-apocalyptic world

Choose between Mavra, superhuman resistance soldier, or Doyle, a robot with a conscience, and take on the harsh world around you. Through five levels full of horrors only the most demented minds can conjure, you must bring the robots to their knees once and for all so humans can flourish again.

Kick the tires, look under the hood

Blazing Chrome features five levels, 16-bit stylized graphics, local co-op, run and gun action that bursts at the seams. This is pixel art like you would expect on the Neo Geo back in the day, overly detailed and full of little nuances that make you want to pause to take it all in.

You are going to want to use a controller on this one if playing on Steam. Just trust me on that one. I cannot imagine playing with the keyboard.

Blazing Chrome is available now on Steam for PC’s (Windows only at the moment), PlayStation 4, Xbox One (also supports Windows 10), and Nintendo Switch.