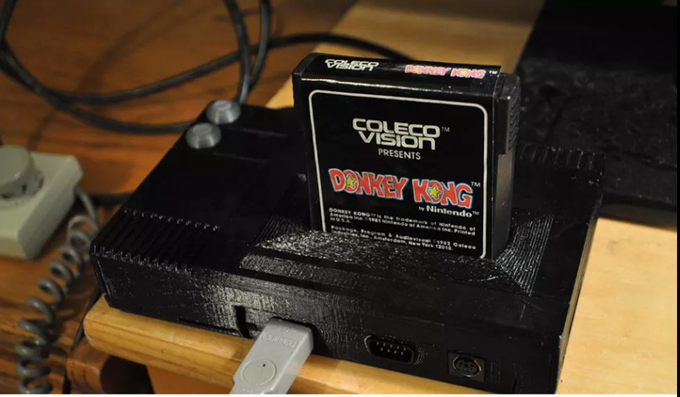 On November 7th, 2018, the CollectorVision Phoenix console ended its Kickstarter campaign without reaching its goal of $230,000 in backing. On paper the Phoenix looked like a shoe-in for getting funded on the platform that pushed nearly $9 million towards the Ouya console. While the Ouya is the high watermark that no console campaign has come near since, there have been other consoles, hand helds, etc successfully funded on Kickstarter since that magic beast came through and put millions of eyes on crowdfunding. The CollectorVision Phoenix though, something kept it back from its funding goal. I am going to do my best to answer “why” here in this article.

Before I start, I want to point out that the funding goal is equal to about 1,100 backers going for the minimum “console and controller” option (disregarding the cheaper tiers here) at $209 each. On the surface, that is not an astronomical number to reach. There were many other tiers available such as Sydney Hunter and the Caverns of Death for ColecoVision (versions of this game for other platforms was successfully funded on Kickstarter many years ago) and various special editions of the CollectorVision Phoenix console.

First, the focus on this being a Field Programmable Gate Array (FPGA) ColecoVision compatible system. While it is currently a popular buzz word, it is still a mysterious term for most people even after having it explained. Instead, I think it would have been better to pull an old marketing gimmick of using two televisions side by side to show just how close this console replicates the original ColecoVision hardware and focus on that in the campaign page and the accompanying video.

This side by side comparison would have been exceptional during the public play tests that CollectorVision had the Phoenix available for fans to play.

Next up, making use of the FPGA internals not priority from outset. The CollectorVision Phoenix campaign was launched on October 8th. On October 21st the campaign saw Update #5 made public – the Phoenix now would play Atari 2600 games at launch (I believe this was formerly a stretch goal of the campaign).

I see a couple of problems here. First, this should have been in the campaign from day one. The most press coverage and interest in this campaign was going to happen in the first seven days with only die hards still touting it in the last week or few days. That middle period is not often where tons of backing appear on these types of projects.

So waiting till the end of the second week to move a stretch goal to standard option just comes off as either desperate or gives potential backers the idea the stretch goal was a cash grab. I say that because the overall funding amount was not effected, nor was the backer rewards, to reflect the absorption of this former goal that required X amount of additional money ON TOP OF the minimum funding to make happen. I believe Kickstarter will not let you adjust the funding goal after the campaign goes live, you can only edit the stretch goals and backer rewards, I believe.

Let’s be clear here, I am not stating CollectorVision were attempting to scam anyone here. I am simply giving my impression of the situation based on how the campaign turned out.

Had they included Atari 2600 capabilities from the start it may have helped them bring in more backers, and it might have helped potential backers with what I think is their next problem.

A lot, I mean a lot, of people still have a bad taste in their mouths from the Coleco Chameleon debacle. This is something I covered nearly daily on Retro Gaming Magazine.

It was evident in many posts on social media where the CollectorVision Phoenix was touted – fans constantly made pokes at this project. Too many to link directly to any single one or ten in this article. Just know, it was there and even for me, it was annoying.

This is due to a few reasons, I think. First of all, CollectorVision were making the pack-in title for the Coleco Chameleon (announced for the console when it was the RETRO Video Game Console) console, Adventures of Tiny Knight. We all know how that console became the butt of any joke in gaming that even remotely possibly could have used it, and many that it simply was thrown in for kicks.

Next, this being a ColecoVision compatible console, CollectorVision had to go heavy on the promoting of this fact – otherwise why bother. Anyhow, that fact and the fact that CollectorVision were working on the pack-in for the RVGS/CC makes it tough for the average potential backer to throw money at this campaign. Look, I understand, they were only making the pack-in, they had no influence on the console outside of that as far as I know.

That does not absolve CollectorVision of any bad PR that comes from being connected with that fabrication of a console.

Was this a super big problem for the Phoenix? In some ways, yes. Mainly I think this may have helped larger sites like Engadget, Geek, The Verge, Kotaku, etc from touching the Phoenix.

Any way you slice it, getting press coverage for these crowdfunding campaigns is a huge impact on your chances of success. Not being featured on some of the largest gaming and entertainment websites certainly hurt the chances of the CollectorVision Phoenix getting funded. 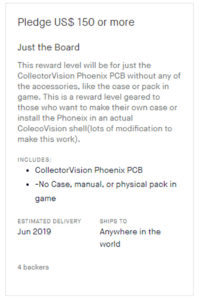 Another problem I saw was the potential for confusion with backer rewards. First, the cheapest backer level was for Sydney Hunter and the Caverns of Death, complete with box, for the ColecoVision console. That is fine, it is at least a version for the console. The next reward level, $150, is the first of the confusing ones, at least how I see it. Backers of this reward level, of which they got four, you would receive just the PCB board of the Phoenix. They state this is “…geared to those who want to make their own case or install the Phoenix in an actual ColecoVision shell (lots of modification to make this work).” This backer reward also does not come with a copy of Sydney Hunter and the Caverns of Death. Here is a missed opportunity to have reworked the board to fit the ColecoVision casing – considering this to be too expensive, I would have removed this backer reward completely.

The $199 backer reward level does come with Sydney Hunter, loose, the console, but no controller. To get a controller included you need to pledge $209 or $225. Then we get into the different colored cases and whatnot.

All told, there are 7 different backer levels for the console with some variation from just the board to complete and different colors and even signed. Then there are two volume discounts available for a total of 9 different backer reward levels all offering something slightly different than the last.

Confused yet? Sure, seasoned crowdfunding users are used to these types of options but what about the first time backers? The people that saw social media promotion or an article on the Phoenix and thought it was cool and wanted to help make it happen? Sure, they could have asked back on the other platform where they saw the initial post about how this works but this is the Internet, how many people actually do that? Especially on Facebook or Twitter where snarky replies and innuendo flow rampantly.

Next up is how the Phoenix was presented to fans via Kickstarter. The campaign was launched under Brian Burney’s account, his first campaign created with zero Kickstarter projects backed by him. This speaks volumes to crowdfunding users – they tend to support those that support others in the community, especially when asking for nearly one quarter of a million dollars, minimum, for your project.

Mr. Burney, who is featured prominently in the preview video, is obviously the hardware guy behind the CollectorVision Pheonix. Now, anyone that followed the Coleco Chameleon fiasco knows how well it worked out having with Mr. Carlsen and his YouTube RETRO VGS demo video, knows not everyone is exactly camera friendly or personable. No offense to Mr. Burney, not everyone can be a successful pitch man.

The video above is posted by StopDrop&Retro who details why no one can use the original video Mr. Carlsen made available (he filed claims against anyone on YouTube that made it available).

CollectorVision should have used their own pitch man level member of the team, John Lester – aka Gamester81 on YouTube, who has over 100,000 subscribers on his YouTube channel. I understand Mr. Lester did post a preview video with him and Mr. Burney at a trade show, maybe that video should have been the featured video on the campaign page. In this video, Mr. Lester is able to translate a bit of the techie lingo and clarify a few things with Mr. Burney – much better than the video that was used.

One reason I can see that Mr. Lester, who has a successfully funded Kickstarter campaign under his belt, did not pitch the CollectorVision Phoenix is because that funded project is not yet completed according to their backers (as of November 8th, backers are leaving comments on the campaign page asking about when their rewards will be shipped).

The Phoenix may have been able to achieve more of its funding goal, if not at least reached it, had Mr. Lester been able to launch the campaign under his Kickstarter account.

According to the Kickstarter rules, “We don’t permit running multiple projects at the same time, or launching a second project before fulfilling your first one.”

I don’t see this one being a big factor in the Phoenix not getting funded but it is still worth noting as a possible reason Mr. Lester was not used to pitch the crowdfunding campaign.

There were a few misteps with the CollectorVision Phoenix Kickstarter. They have announced going forward with plan B, the main reason I waited till AFTER the Kickstarter was complete to write this article.

Plan B is, according to Update #7 on their Kickstarter page, CollectorVision will be going with pre-orders on their website where they can accept PayPal – apparently something many potential backers asked about.

Please note, backing a project on Kickstarter will take the money out of your account once the project is fully funded, if it is not funded then no money is taken. Pre-ordering anything using PayPal will take the money out as soon as you click “buy”, also refunds can be cumbersome if you get cold feet or the project is taking too long (PayPal only allows refunds up to 180 days after purchase and will require some form of proof before granting the refund). I know that may be common knowledge to many people reading this but we have to remember, new users come online every day.

At the end of the day, it looks like CollectorVision will not be giving up so easily on the Phoenix. For fans of the ColecoVision that is great news.