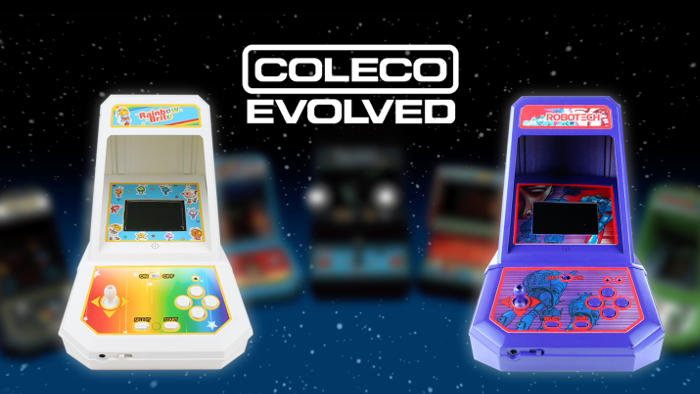 Coleco are bringing back the mini arcade. For those that do not know what a mini arcade is, you are in for a treat. These little bad boys are completely self-contained units – game, controls, screen, everything – that play one game. The beauty of this design is each unit has its own custom artwork and can feature design choices that suit each game. These are all new and improved versions of the classic designs. The improvements are impressive.

There are two games bringing the relaunch of the Coleco Mini Arcade back – Robotech: The Macross Saga and Rainbow Brite: Journey to Rainbow Land.

Each of these titles are unique to each other, each based in a different genre.

Rainbow Brite: Journey to Rainbow Land is the first time that the Hallmark franchise has seen a video game release. This Coleco Mini Arcade features an originally developed adventure specifically designed for the Mini Arcade.

Fans of adventures such as Nintendo’s Legend of Zelda will certainly feel at home guiding Rainbow Brite in her debut adventure.

Robotech: The Macross Saga is a side scrolling action game featuring many genres. Anyone that has watched Robotech knows the VF-1 Valkyrie has three modes – each unique to the others. You will have to make use of all three modes here in your effort to stop the evil Zentradi empire.

Coleco launched their Kickstart campaign earlier today and already are less than $700 from their $30,000 goal. That is quite a bit of fan support being poured out.

Fans are putting their money where their mouth is and supporting new, official, releases such as these Mini Arcades.

If you have not thrown your support behind this then don’t wait. If you are short on cash, please note that Kickstarter only charges once the campaign ends (around early June). If you are still not able to support this, no fret. Give the campaign a tweet, a share, a like, shoot some positive vibes their way. Anything and everything helps with these things.