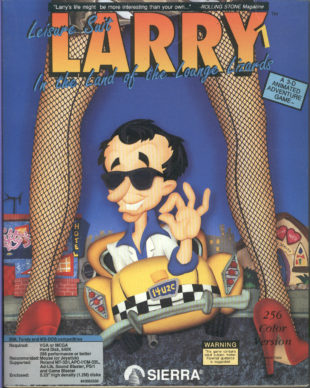 It is a sad day when we see things like this. Al Lowe, creator of Leisure Suit Larry while at Sierra On-Line, put a few files up for auction on eBay recently. As expected, fans of Leisure Suit Larry 1 and 2 quickly made this become a “big thing” in the retro gaming community. By becoming a big deal though, the auctions caught the eye of current owner of many Sierra On-Line intellectual properties, such as Police Quest and King’s Quest to name a few. This is important because that company is Activision and they have taken legal action against Mr. Lowe in reference to those two auctions. End result, those auctions are now pulled.

While Activision is easily viewed as a the bad guy here, at the end of the day, they are protecting their IP’s. They are protecting their investments. Plain and simple. Nintendo does this with their legal action against ROM sellers and websites. Square Enix does it against fans over independent homebrew takes on their property.

It doesn’t make it any easier to accept by fans though.

Activision’s situation is a little different though. According to Britton Mathews, Mr. Lowe received papers stating Activision were ready to go to court over the auctions.

The kicker is, allegedly Activision admit they do not own the rights to the Leisure Suit Larry source code but it could contain shared code to games they do own the rights to – Police Quest or Space Quest supposedly being referenced directly.

The problem arises from the fact that Mr. Lowe is not financially capable of taking on a company such as Activision in this legal matter. This is often how these cases go though. It is much easier, and cheaper, to simply do as the larger company wants.