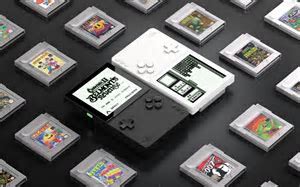 The hardcore among you probably know the name Analogue. They are kind of the Ferrari of reproduction consoles. Their product is not cheap but for that money you get a lot of bang for the buck. Previously they have done NES, SNES, and Sega Genesis products to name a few. Now they are adding a portable that will support Nintendo Game Boy, Game Boy Color, and Game Boy Advance – other handhelds planned with cart adapters later.

Down to the nitty gritty

According to Arstechnica.com the Analogue Pocket will feature a 3.5 inch 1600×1440 resolution LTPS LCD display. That display will feature 615 pixels per inch – quite a bit more than anything Nintendo has released.

Under the hood we know it will sport an Altera Cyclone V FPGA which Analogue has plenty of experience with already (it was used in the Super Nt and Mega Sg units). What is interesting here is Anologue is including a second FPGA this time a Cyclone 10. Arstechnica went onto say this second FPGA is for developers to port cores.

The Analogue Pocket will also feature stereo speakers, an USB-C rechargeable battery, and the buttons can be remapped as you see fit according to MSPowerUser.com.

That is awesome news as I know from experience there are some games that just don’t work as well as they could with the default button mapping. Thankfully Analogue are giving us a chance to adjust the controls as we want. That is awesome.

Price is currently set for $199

What you can expect the Analogue Pocket to do

Besides being able to play Nintendo Game Boy, Game Boy Color, and Nintendo Game Boy Advance titles, the Analogue Pocket will do more. Through cartridge adapters, the Analogue Pocket will be able to support other handhelds. From the Sega Game Gear to the Neo Geo Pocket Color and Atari Lynx, we can finally enjoy these games on the go in HD resolutions. Obviously, some games are going to work better than others here but the option to play them will be there.

You can even grab the Dock to play your portable games on your HDTV using a Bluetooth controller according to the Analogue website.

No word on if the Watara will be supported.

So, I want to know, will you be grabbing the Analogue Pocket at $199? While it seems steep at first, there is a lot of interesting stuff going on here.