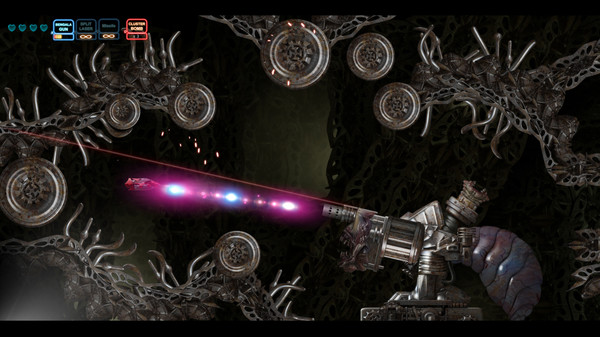 Scrolling shooter games are not just for independent homebrew developers and retro consoles. Remote Life is proof that developers are willing to take a chance on this once industry pushing genre. Now if fans will step up and support it is another question. Next Game Level have covered all the bases they can including providing a free demo of Remote Life. Now let’s discuss why you should check out Remote Life.

Ties to the past

Remote Life is what I imagine would have become of the cybernetic/animal kingdom hybrid scrolling shooter. Titles like Insector-X on Sega Genesis and Dead Moon or Deep Blue on the Turbografx-16 feel like predecessors of sorts. Obviously Remote Life has those retro titles beaten in the graphics department, but it is easy to see many similarities.

Graphically Remote Life has that organic feel mixed with machinery and technology look. I personally like this style as it opens so many new options for enemies and even level design. Next Game Level have certainly set Remote Life apart from the very thin competition they face on Steam.

Stepping out on its own

The way Remote Life steps out on its own is obvious through and through. From enemies to the level design to the special weapons, this title is going against the standard. Some bosses take up most of the screen while others require several screens to contain their complete form. Certain enemies are obviously more mechanical than fleshy pieces and others require a double take because they are just so weird.

Some levels give you an escort requirement, something First-Person Shooter fans are quite familiar with, and others give you full reign to deliver hell upon the life forms in your way. No matter the goal of the level you will probably be enthralled with the graphics.

Supporting those that give us what we want

Head over to Steam, grab the demo for Remote Life and if it is your cup of tea, maybe give them some support. If enough fans do that then we would have more variety in gaming outside of battle royals.