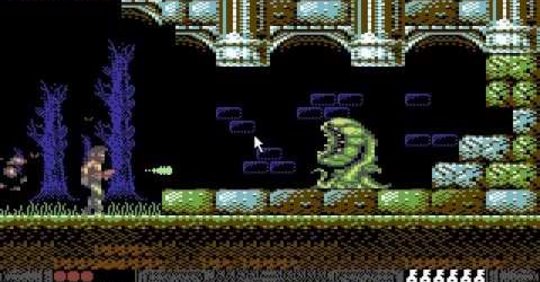 It is not all that often that we get sequels to indie developed Commodore 64 games. That is why I am excited to write up Soulless 2, the obvious sequel to Soulless, both for the C64. This time the subtitle is “The Armour of Gods”. If you checked out the original, then you know why the sequel is going to rock. If you have not, then check back in after the jump.

As you can see in the YouTube video below, Soulless 2 is far from complete. A lot of the enemy artificial intelligence is not in yet and there are other details to come as well.

What is in so far are some great enemy animations, death animations, and backgrounds that are not just flat colors. That gradient look I talk about a lot is in force in Soulless 2 and I am perfectly fine with that. It makes the backgrounds have a bit of depth and detail without making the action hard to follow.

Some backgrounds also feature animation – waterfalls, eyes blinking, and more. Nice touches that give life to the game world.

What I hope to see more of in Soulless 2

Pretty much more of everything is a lazy answer but it is true. What is shown in the video is awesome and I am sure the developers are going to rock this.

Since this article would not be nearly as interesting if I left it there, I do have a couple of things on my “I don’t code but…” list.

One, I would love to see some of the platforms become a little clearer that you can use them. Namely the trees you can jump into. There is not much in the clue department telling you that those are platforms. It is a guessing game in that regard even though most are positioned in “dead end” areas. Do or die kind of action and personally, I am not a fan of that.

Those changes hinted at in the title

According to the Icon64 Facebook page, Soulless 2 will not be available on tape. This sucks for those that are still rocking that medium for their gaming but there is a reason for it. Apparently, the sheer amount of loading in Soulless 2 negates being able to use the tape format for release.  Sorry guys, progress requires pushing forwards sometimes.

Keep a browser tab open here on RETRO Mag so you can be kept up to date on new games like Soulless 2. While you are at it, keep a tab open with the RETRO Mag Patreon. Maybe throw a buck or two of support in the pot and help us keep pushing forward. We appreciate every bit of support – whether monetary or by other means like sharing and liking or commenting. It all means a ton to us here at RETRO.