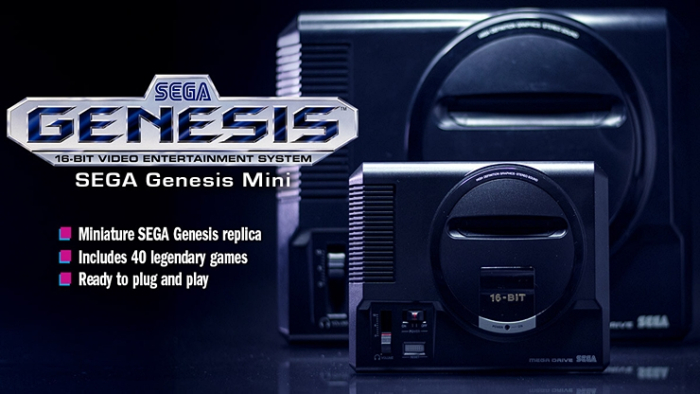 Sega is in a precarious position. On one hand, they are loved by many retro gamers but on the other, they are loathed by many retro gamers. This company stands alongside Nintendo when it comes to games that defined the 8 and 16-bit console wars. Along with that status, Sega is not exactly known for keeping those fans happy to support the company. From license agreements with subpar hardware makers looking to cash in on the retro craze to compilations that are “just slightly off” with fans due to key games being missing – Sega has been there. Their Sega Genesis Mini is obviously their attempt to regain the support of retro gamers.

First the game list, which was originally planned to include 40 titles and now has been bumped to 42 – just because they can. It is interesting how they are handling the launch of the Sega Genesis Mini as well. According to DigiskyGames.com Sega has put M2 in charge of these ports. Sega has also slowly released the full list of games this is genius on their end as it keeps the gaming press producing content and pushing the console to fans for free. Good job there Sega, about time you remembered how to market something.

Next, the titles chosen to be on the console. This is key, I don’t care what anyone says, if the game list sucks, it is not going to sell well. Sega has done a great job here, outside of including Altered Beast, in getting nearly nothing but AAA titles. Sure, they cannot compete with Nintendo’s Super Mario franchise as far as name recognition, but they can compete on “feelings” that gamers remember from playing certain games. They are pushing that hard with this collection.

Notice any “interesting” names there? Let me point them out for you. Tetris. Darius. This is the first time that Sega’s Tetris will be available to fans, legally. This is their “Star Fox 2” so to speak. The shocker title, and what a shock it is. Very cool that they worked out the licensing on this one.

Next is Darius a shooter, that according to Retro Game Network is a brand-new port made specifically for the Sega Genesis Mini. That means there are two games that are only legally available here. If you look at the price point Sega is shooting for (about $80 and equivalent in other markets according to Game Informer) that is about the same price as we paid for Genesis games back in the day. What I mean is, buy this mini and view it as having bought Tetris and Darius and you get everything else for free. What a steal!

What do you think of the list of included games? For me, I am excited for this mini more now than ever before. There are many titles that are, for the first time, available in a collection though I am wondering why no Phantasy Star II, III, IV and no Shining Force II here.