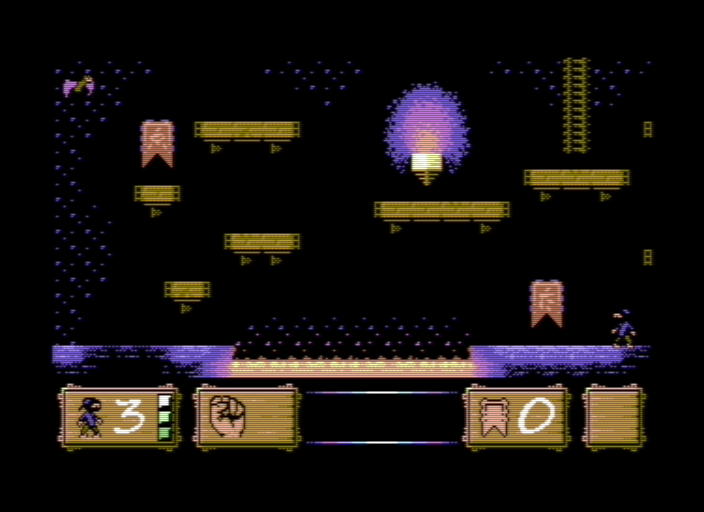 The Commodore 64, well, if you have been reading RETRO for very long you already know my feelings about this computer. It just won’t die, fans won’t let it. That is awesome for other fans, like me, because we keep getting new games. Ninja Blue being one of the newer ones.

Ninja Blue is a single screen at a time action platform affair featuring many platforms and enemies to fight. I am not quite sure how you advance to the next level because the only information available is a short YouTube video that ends abruptly.

Going out on a limb

I am going to say that advancing to the next level probably collecting certain objects. Not much of a stretch of the imagination considering what we were shown so far in the video below.

Tidbits to pay attention to

What is shown for Ninja Blue is pretty good. Graphically the characters are small but effective. There is a good bit of shading and use of dithering to maximize the graphics. Animation is minimal but considering the size of the characters it is not all that noticeable.

Ninja Blue is not a single screen affair like Lode Runner but more in line with Impossible Mission. There are screens connected to each other and you advance by reaching the edges. There are four stages planned each featuring at least 10 screens with day/night cycling sprinkled in.

The character you control has a few offensive and defensive moves such as kicks and punches and a jump. Apparently additional attacks and weapons will be added as development continues.

According to the Lemon64 forums, Ninja Blue is programmed by Antonio Savona.

Where we go now

There is not a lot more available for Ninja Blue at this time which is a shame. Things are too early to know if the developer will be selling or giving away Ninja Blue. I will definitely be keeping this one on my radar and covering it as more information becomes available.

If you want to grab some cool action games, head over to the Piko Interactive store, choose your console or hand held and browse the available games.