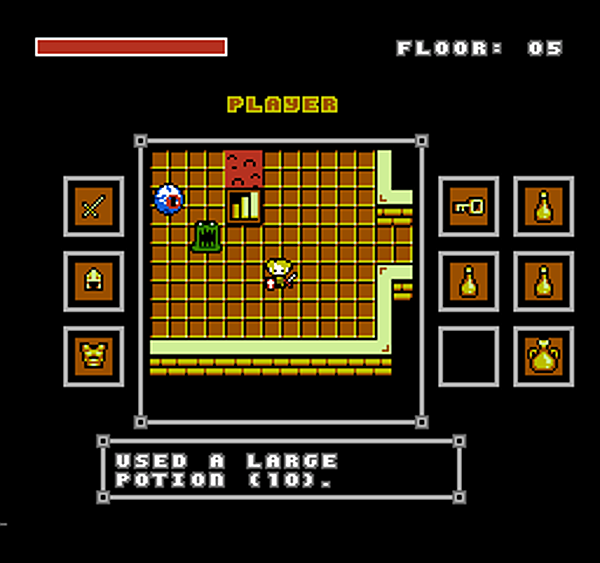 New Nintendo Entertainment System (NES) games are always an interesting lot. While I love the Atari 2600, there simply is only so much that can be done with the available graphics. I know, graphics along don’t make a great game. Just sometimes you want something different. The Tower by Never Obsolete Software may be that “different” for people in the same boat as me.

While early in development, The Tower already shows a lot of promise and the to do list is already showing attention to areas that need work. All in all, Never Obsolete Software are on the right track to creating an interesting graphical Rogue-like title for the Nintendo NES.

Rogue, for those that don’t know, is a classic adventure title that featured graphics so basic they were literally letters and numbers from the keyboard (including colors to show degrees/breeds/etc). Rogue originally hit in 1980 and has been the inspiration of thousands of games since then. Some you may recognize such as Diablo or for classic computer nerds, Sword of Fargoal (which added fog of war to the proceedings).

The Tower is one of the latest games to use Rogue as inspiration and it looks great so far. While animation is a little lacking, the dungeon detail is clean and succinct – especially for a Nintendo NES game.

As with any Rogue-like game, the levels will have some randomness to their layouts when the game is finished. If you have never played a Rogue-like then you are in for a treat as this type of game is really endless levels that can be fun as long as you can stand.