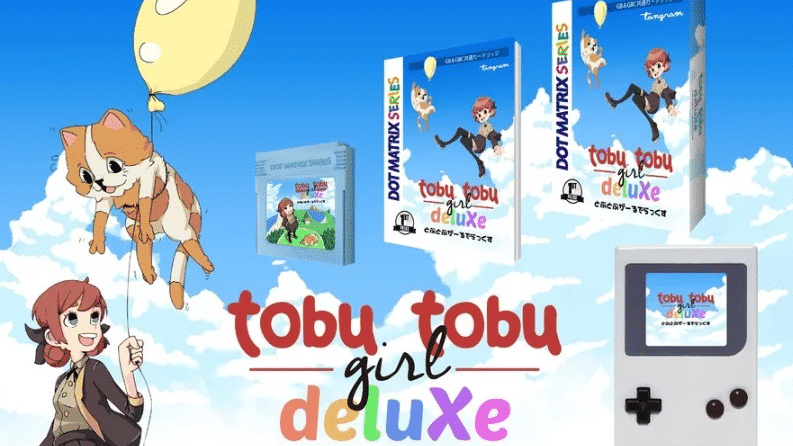 Tobu Tobu Girl Deluxe is interesting in the fact that it is not a “Game Boy Color inspired” game, it is a new game for the Game Boy Color (and backwards compatible with the original Game Boy line). While it is great to see developers “limiting” themselves to slightly better specs than what real retro hardware featured with the myriad of Steam releases, it is another thing to see a developer create a game for that retro hardware. That is exactly what we have with Tobu Tobu Girl Deluxe by Tangram Games and First Press Games.

First, Tangram Games originally released Tobu Tobu Girl in 2014 as an entry in the GBJAM where it placed #55 out of 227 entries. Bryan Ochalla of Hardcore Gaming 101 points out some strong similarities to Balloon Kid by Nintendo which I don’t really agree with based on the mechanics used in each title. Mainly Balloon Kid sees us controlling a character that relies heavily on, well, balloons to advance in the levels. Tobu Tobu Girl Deluxe relies more on flapping arms, jumping on enemies, and dashing mechanics – based on that, I probably should claim it has more to do with Sonic the Hedgehog or something. It doesn’t so I won’t.

Anyhow, the original Tobu Tobu Girl saw a limited physical release which apparently sold out in hours, according to the Kickstarter page. This is the first time that the deluxe edition will see a physical release though.

What sets the deluxe edition apart from the freely available ROM file? For one, better graphics that take advantage of the Game Boy Color, and better advantage of the original Game Boy. What is cool here is they are keeping it backwards compatible with the original Game Boy line so you can, with the help of a flash cart, have both versions available on your black and white Nintendo Game Boy.

Want to help make Tobu Tobu Girl Deluxe a reality? Hit Kickstarter and show your support – whether that is just sharing on social media or financial – it all helps.