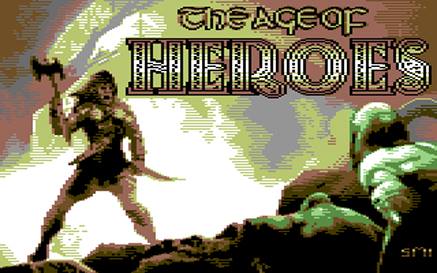 Ah, the good old Commodore 64, the computer that many have written off already as dead and gone. For one, check out our coverage of new games here on RETRO Magazine, second, check this new hack and slash 2D side scroller that has a strong fantasy vibe and tell us again that the C64 is dead. New footage has just been released by T Story, G Rottensteiner, A Volkers and S Collier – don’t worry, they have a Facebook page.

Hack and slash games used to rule the roost. Back when we had Rastan, Blades of Vengeance, Cadash, Gauntlet, and many more seeing regular coverage in gaming publications of the 80’s and early 90’s.

Today is a different story as gaming has changed so much. Considering fantasy games are mostly melee weapon based, they don’t lend themselves all that well to the First Person point of view that is all the rage with online games and current gamers.

That is fine, especially as long as we have independent homebrew developers working this genre from time to time.

Age of Heroes is one such title. You are controlling a titular Conan-esque character complete with loin cloth and two handed sword as he jumps and battles through level after level.

From the early footage presented in the videos it seems hit detection is not implemented yet and neither are enemies. There are some level hazards to check out though, from pits to huge knives jetting up from the floor – keeping an eye open for your safety is a requirement.

Graphically Age of Heroes is very detailed, great use of shading in the level tiles give the levels added depth.

Age of Heroes is already shaping up to be a title to watch for. While not as animated as Sam’s Journey, it is still an amazing work in progress that shows the Commodore 64 is far from dead.