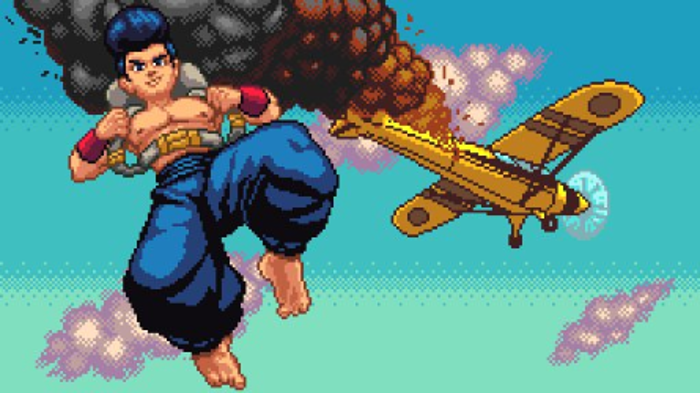 Independent homebrew titles are quickly becoming more popular for the Sega Genesis. Case in point, Retro Nerve’s Kung-Fu UFO. What we have here is a 2D side scrolling action game that has a strong martial arts feel to the action. The main character is a dark headed, topless, fighting machine that is fighting mostly bald men that could afford more clothing (and they say crime doesn’t pay).

What is interesting about Kung-Fu UFO is that it is a 2D side scrolling action game. We are not often lucky enough to get more of these types of games. For the most part the homebrew independent community is focused on illegal ports or puzzle games of some sort. Seeing an action game that mixes genres a bit is more than worthy of us covering it here at the RETRO headquarters.

Currently it seems that Kung-Fu UFO is in the Alpha phase. There is plenty of animation in the main character, though the enemies could use a dying animation. Right now the enemy just blinks out of existence. No crouching in failure at not stopping you. No laying down in exhaustion. Nothing. Just blink and they are gone.

One thing I would ask the developers to work on is the falling speed and the landing animation. The main character falls way too fast. Also, no matter the height of the jump, the main character does a short crouching animation. This can be annoying as it could slow down the game. I can understand the animation if he is jumping down from a really high point, but a short “hop”? The animation just seems out of place.

Graphically, Kung-Fu UFO is quite impressive already. Visually we are talking around the end of the first development cycle of the Sega Genesis in quality here. That is some great company to have.