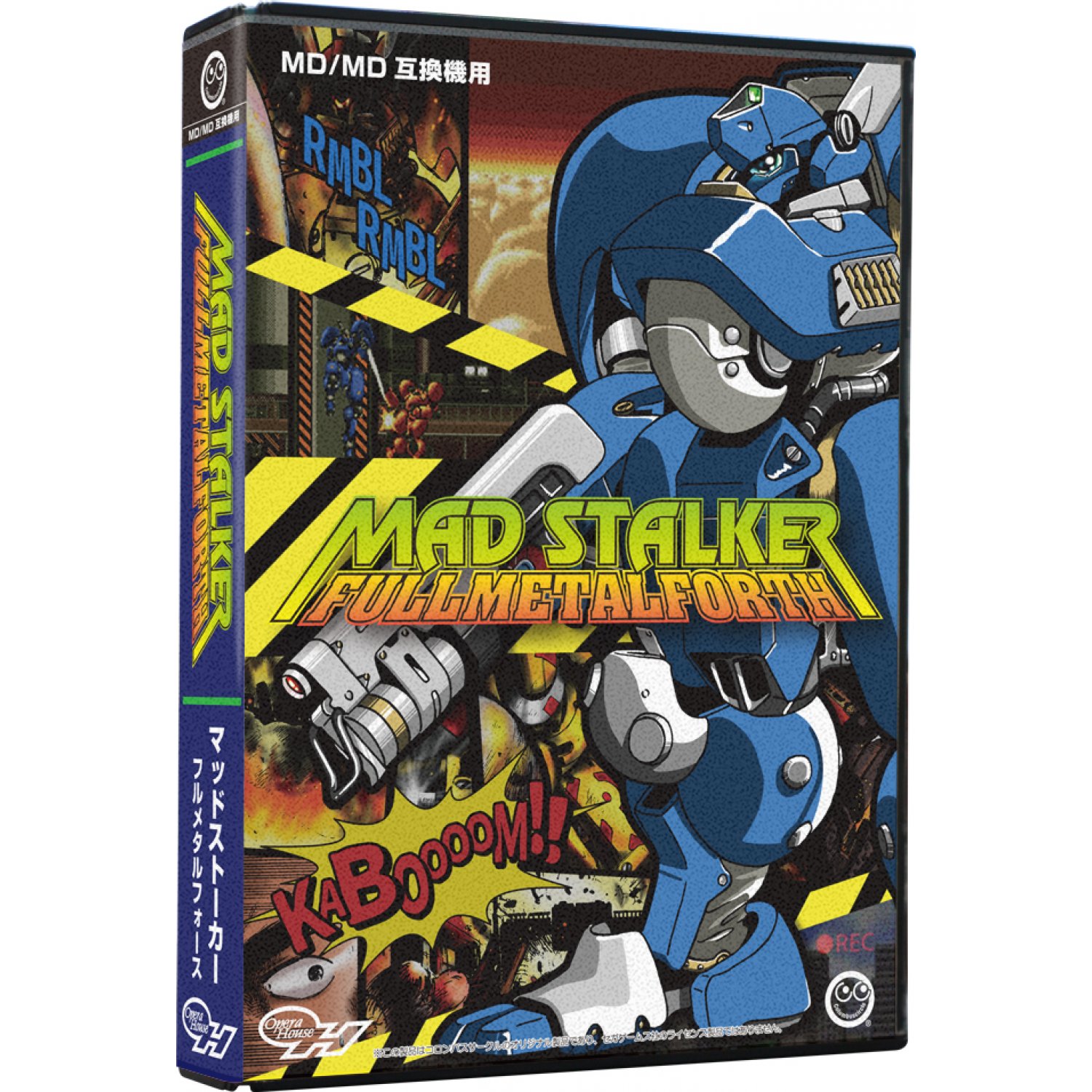 The Sega Genesis/Mega Drive has an active scene focused on developing and releasing both old and new games for it. Successful Kickstarter campaigns lead to modern classics like Xeno Crisis and Tanglewood. Companies such as Piko Interactive have released many games, including translations of Taiwanese games and Wisdom Tree’s catalogue, and plans to unleash Jim Power in the Lost Dimension, a previously unreleased game. Another game which was nearly finished back in the day, but never put on store shelves, was Mad Stalker: Full Metal Forth (sic!). In September this year, it was brought into the light by Japanese publisher Columbus Circle, a company which recently re-released legendary shmup Gley Lancer and a few other titles. Unfortunately, the hardware of their cartridges leaves a lot to be desired, as it doesn’t contain 5V level shifters, and the PCB is also thicker than Sega’s official cartridges, which could harm your console. The most optimal way to play this game is to use a flash cartridge or emulator.

Before we dig into this version of the game, we should know there are quite a few others available. The version of Mad Stalker for the Sega Genesis is based on the original X68000 version, but can’t quite compete with it graphically, with fewer colours and details, as well as a huge black border on its HUD. It’s a shame, because at least more parallax could have been added. Perhaps it is missing because this version was never completed back in the day, and when Columbus Circle picked it up they mostly just added the missing sound. Which we’ll get to later. The PC Engine CD version has an arranged redbook audio soundtrack, numerous voiced cut-scenes and three different characters to choose from in the story mode. However, it is a bit slower and lacks parallax scrolling. There are a few other versions, for example a PSOne remake.

The game takes place in a post-apocalyptic city called Artemis, during the year 2142 (only 102 years until then!). It tells the story of a warship computer taking control of mecha units left after a war. These wreck havoc in the city, and it’s up to you to stop it by operating another mech through six stages.

Mad Stalker plays like a typical sidescrolling brawler. You cannot move up and down in the environments, like in Streets of Rage, instead it is strictly left and right like in Ninja Warriors. The stages are populated by other mechs you need to fight, and they all end with a boss battle. Fighting is reminiscent of Street Fighter II, where you can throw, do both weaker and stronger attacks and even pull off special moves such as a quick dash and a powerful uppercut to do massive damage. Other than a health pick-up every now and then, there isn’t anything useful to find throughout the stages.

Fighting is a bit stiff, but fast and fun at first. It gets old soon though, much thanks to the annoying bosses with cheap tactics. Often you can only beat them by doing something cheap yourself, over and over again, because their counters on other moves most often take priority for dealing damage. There are unlimited continues and the game is thanks to that not too hard, at least not on normal. Give it an hour or two and the ending sequence should be near in sight. However, there is some replay value to be had with the versus mode, in which you can fight the bosses or your friend using six different mechs. Too bad you cannot use more mechs in the story mode, like in the PC Engine version.

What Mad Stalker has going for it graphically is the huge sprites, which are as big as in a one on one fighter. The movesets of each mecha is quite big, resulting in many cool sprite animations. The urban mecha setting is also well presented, with huge city landscapes, both intact and destroyed, to traverse. However, there are no animations in the backgrounds, leaving a lifeless impression.

The music is melodic rock with some really fast bass lines and catchy drums. Apparently, the version Columbus Circle secured had no music, but thankfully the original composer joined the revival project. And it really shows, as the sound quality here is among the best on the Genesis, especially the rhythm section. The compositions are well written and fit the game. Though they are the same on both versions, they actually sound a bit better on the Sega system. Sound effects aren’t anything special to write home about, but you just have to love the fact that they sampled the classic explosion sound effect from animes of the era.

Mad Stalker is quite an OK game, with a cool setting and rocking soundtrack, but not by any means top tier for this console. The X68000 version is superior thanks to the graphics, and the PC Engine CD version has more meat on its bones. There are better brawlers on the system, like the aforementioned Streets of Rage series, and better mech games as well, such as Ranger-X. Testing the game prior to purchase is definitely recommended.